Dangers for your Pet in Rainy Weather 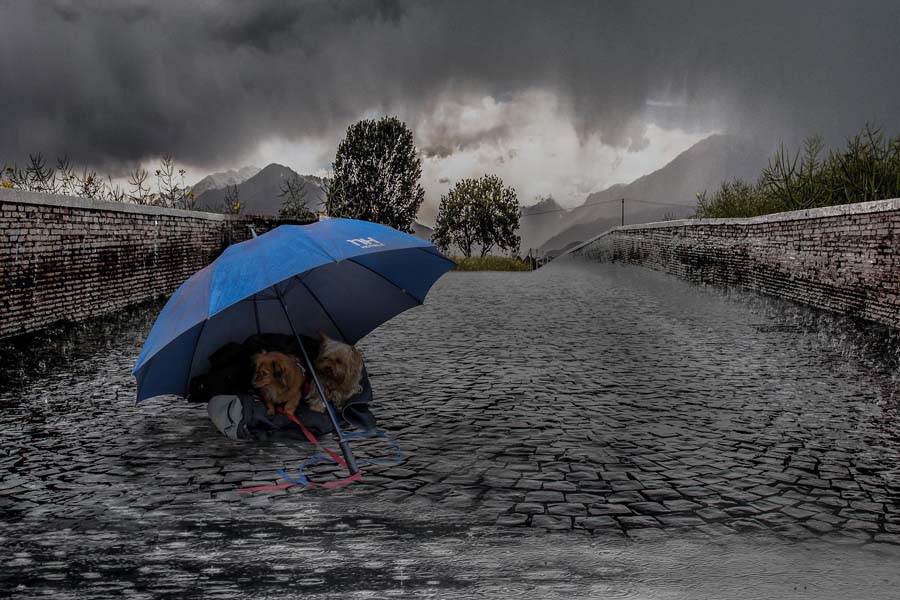 Dangers for your Pet in Rainy Weather

Rainy weather is inconvenient for humans, cats generally hate water and dogs don’t get walked as often in the rain, but there are other aspects to rainy weather to be aware of – an increase in parasites including leeches, snails and slugs, which are potentially life-threatening if eaten, and leeches and microscopic protozoal parasites, such as Giardia, found in soil.

Did you know that it can be dangerous for your dog to eat snails and slugs? In fact, every year at Turramurra Veterinary Hospital, our vets treat at least one case of a nasty disease called angiostrongylosis, which is caused by a parasite found in snails and slugs.

Snails and slugs act as an intermediate host for the rat lungworm parasite, Angiostrongylosus cantonensis. Snails and slugs eat rat faeces containing the larval worms and then the parasite develops further inside snails and slugs. Rats eat slugs and snails and the parasite then moves from the rat’s intestines and enters the bloodstream, then finally some of the parasites enter the central nervous system, including the brain. In rats, the parasite rarely causes any damage to the brain, but if these infected snails or slugs are ingested by another species such as your dog, or even children, the outcome is a lot more serious.

What are the clinical signs to look out for?

If the rat lungworm ends up in the wrong host, including dogs or children who have eaten infected snails or slugs, the parasite migrates through the central nervous system’s spinal cord and brain, causing severe pain and inflammation that can lead to lameness, severe back pain, paralysis, incontinence, brain and behavioural changes, coma and death.

Who is at risk?

Angiostrongylosis usually effects young large breed dogs, such as Golden Retrievers and Labradors, who tend to eat everything in sight, but it can affect any breed. Sadly, even toddlers exploring the backyard or teenagers daring each other to eat a snail or a slug at a party can be infected. So, it’s important to educate children about the dangers of eating snails. The most common time of year to see this disease is between April and July.

Can the problem be treated?

Treatment involves reversing the huge inflammatory response that occurs as a result of parasite migration as well as strong pain relief. The problem can be difficult to diagnose, particularly as the first clinical signs can appear to be an injury if the dog comes in with a limp.

How do I prevent it?

Feeding bowls should be indoors or snail-proof to prevent snails and slugs sliding into the food bowl. If you see your dog eat a snail or a slug, then our vets can induce vomiting to reduce the risk of parasite migration but it needs to be immediately after ingestion.

Leeches can affect your pet too

Dogs are an easy target on walks through wet areas because they don’t wear shoes and quickly attach to anything that moves into their trail. Unless you actively check your dog for leeches, the first sign of a leech is usually an open bleeding wound, often on a paw or limb with no leech in sight, because the leech has had his fill and detached by the time a problem has been noticed.

How does a leech feed?

Leech saliva contains both an anticoagulant, to increase local bleeding, as well as a local anaesthetic, which means they can easily go unnoticed while they have a meal of blood from their host.

What should I do if I see a leech on my dog?

In simple terms, pull it off. If you’re unable to do this, sprinkling some salt over the leech will usually cause it to drop off. If the wound looks significant and you are worried about hurting your dog or making the wound worse, then making a veterinary appointment for us to remove the leech and treat the wound is advised.

Are cats affected by leeches?

Leeches rarely get an opportunity to attach to cats due to their fastidious grooming habits, but it’s not impossible, so when your cat comes indoors after being outdoors in the wet, if you know your yard is prone to leeches, it’s sensible to check their haircoat for any wounds or creepy crawlies!

Should I see a vet if there are wounds caused by leeches on my pet?

If the wound is significant or there are multiple wounds, then a veterinary visit is recommended to clip the wounds, clean with antiseptic solution and a bandage may be applied to keep the area clean and stop the bleeding until the anticoagulant has worn off. If the wounds are on the base of the paw pads and your dog is likely to step in muddy areas then a rebandage may be required the following day until the wounds have closed over. The vet will assess the severity of each wound and whether any medication needs to be prescribed.

Are there any other complications caused by leeches?

Leeches are particularly effective at crawling into crevices to conceal themselves while they are feeding. In fact, one of the possible causes of a dog presenting with a unilateral nose bleed is a leech! On several occasions, dogs have presented to our practice because the owner has seen a leech just out of reach within the nasal cavity, yet the dog appears to be unaware of the drama unfolding! Vets sometimes need to sedate the dog to remove a leech from the nasal cavity using a special instrument that can fit inside the nostrils to reduce damage to the delicate tissue within the nose.

There is often an increased number of dogs and cats presenting with diarrhoea after heavy rainfall and in many cases, this can be attributed to the microscopic protozoal parasite, Giardia.

How can my pet get infected with Giardia?

Giardia is commonly found in soil or water that has been contaminated with faeces. If your dog or cat drinks water from puddles in their environment that have formed after rainfall (often impossible to prevent), then an infection can occur. Once ingested, the parasite attaches to the intestinal wall and reproduces by producing cysts which are shed in faeces. Both the motile parasite (trophozoite) and the cyst form are infectious if ingested.

How is Giardia diagnosed?

If your pet is coming to the vet for diarrhoea, then we encourage owners to bring a faecal sample so that an in-house parasite screen can be run. We have an Imagyst machine which can screen faeces for parasites within 30 minutes, which means if your pet has acquired a parasite such as Giardia, the right treatment can be prescribed promptly. As Giardia sheds intermittently in your pet’s faeces, it is still possible that Giardia is present, even after a negative screen (false negative). Sometimes a repeat test is required, or a more comprehensive PCR screen at an external laboratory is recommended.

How is Giardia treated?

There are several different anti-parasitic medications that can be dispensed by your vet for Giardia treatment. Your vet will select the most appropriate medication depending on the species and size of your pet. A follow up faecal test may be recommended approximately 3 weeks after a treatment course. It is not uncommon for Giardia to persist for longer, requiring another course of treatment.

Can I catch Giardia from my pet?

Giardia is a zoonotic parasite, which means it’s possible to transmit Giardia from pets to humans. To reduce this likelihood, it is important to practice good hand hygiene, avoid your pet licking your face and wash hands thoroughly before eating. Giardia cysts are infective immediately when passed into the environment, so faeces should be disposed of immediately. If you develop clinical signs of diarrhoea after your pet has been diagnosed, see your GP for advice.